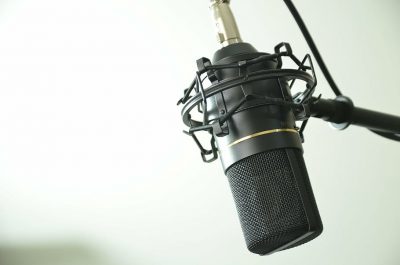 I allowed one of my recorded lectures to be peer reviewed by a colleague who is currently doing their PGCert in higher education teaching, and they have to peer review other staff teaching as part of one of their modules. They emailed me after I’d sent the video to ask what my recording set-up was as the adio was really clear, and I’d created a floating head effect video. So I thought I would share the various bits and pieces I have bought over the past year or so to allow me to produce the best possible quality videos for my students.

The first and most important purchase for me was a decent microphone as the inbuilt mic on my MacBook just wasn’t clear enough for lectures. The only brand I’d really heard of before was Blue but after some careful research (the science geek in me coming out again) I decided to buy a Marantz Pro MPM2000U – Professional USB Condenser Studio Microphone. I knew I wanted the simplicity of a USB mic, and the Marantz had some great reviews. I have to say I am really pleased with it and the audio quality, especially when paired with OBS studio is absolutely incredible!

Although the image above shows the Marantz now comes complete with a sound shield when I bought mine, it did not, so to help cut down on any background noise from living and recording in an old Victorian house with high ceilings and plenty of echo potential, I set the microphone up in a Neewer NW-5 Foldable Enclosure and this seems to help no end in giving a really consistent recording experience.

Five stars for both products and they have made the audio on my lectures really clear. An added bonus, clearer audio equals slightly fewer corrections to make in the subtitles!

Let’s be honest, laptop built-in webcams don’t exactly give a great image quality, but trying to buy a decent webcam without an insane markup was proving rather tricky at the start of the pandemic. I lucked out eventually, and although the webcam I ended up buying is more for streaming than recording presentations, it is still a huge improvement over the inbuilt offering from Apple. The Logitech StreamCam can be adjusted using software downloaded from the Logitech website and offers a lot of control over the image quality. It’s also extremely portable and easy to set up with USB connectivity. I’m giving it 4 out of 5 stars just because it is quite expensive, but at the time, it was the only option available to me.

I knew I wanted to record some floating head videos, especially for first-year students, so they knew what I looked like, and I didn’t want them distracted by my living room in the background, so I invested in a pop-up Elgato Green Screen. Although slightly more expensive than some other green screens, the reviews I read frequently mentioned the ease of set-up, consistent recording experience, and the ability to key out the background. As I was recording in the back of my living room, I didn’t want to have a permanent green screen set up, so this seemed like a good compromise. So far, I’ve not had any problems with it at all; a doddle to put up and take down and providing the lighting is good, removing the background in OBS is easy! This brings me nicely on to the final part of my set-up…

Having never used a green screen in OBS before, I watched a few video tutorials on YouTube to learn a bit about how to do it…a repeating message was the need for soft, consistent lighting, so I lit my desk and the Elgato Green Screen with a pair of Elgato Key Lights. Although two might seem like overkill, I have no natural light at the back of the living room, and the ceiling lights were creating lots of issues with trying to key out the green screen when recording. I really like the Key Lights; they are adjustable for temperature, so you can make the image warmer or cooler and the brightness. To give you an idea of how effective they are, I currently have one set at 17% of max and the other at 15%! These are bright lights, and both can be controlled either together or independently using a really intuitive downloadable app.

Elgato also produces a cheaper option called the Elgato Key Light Air, which I probably would have bought had they not been sold out everywhere when I was looking… I curse everyone buying home recording equipment at the same time…thanks, COVID!